The festival of Goddess Durga Puja is observed for 10 days.In the land of Lord Jagannath, Odisha celebrates the festival of Matha Durga in two different ways.

In Shakti peethas (Temples of Goddess) :

The puja of Maa Durga is observed with proper rituals for 10 to 16 days known as Shodasa Upachara/Shohala dinatmaka,which starts from 7 days earlier to the Sradha mahalaya or Mulastami and ends on Vijayadashami or Dussehra.Goddess Durga is also worshiped by devotees in different pandals in form deities across the state. The pandals are decorated with beautiful decorative.

In Cuttack , disciples can have darshan of 16 incarnations or besas of Maa Katak Chandi & Maa Gadachandi  as a practise of Goddess Durga Puja in Shakti Peetha .

In Puja Mandaps (In form of Idols) :

This form of Puja was commenced in Odisha during the reign of Ganga King Chodaganga Dev in the 11th century at Puri.The earthen idol of Mahishamardini Durga is known as Gosani and the Dussehra fesival is known as Gosani Yatra. It is noteworthy that the co-worship of Mahisamardini Durga with Madhava (Lord Jagannath) is prevalent from 11th century, Eastern Ganga dynasty period, in Puri.

According to mythology, in the year 1512 to 1517 Chaitanya Deva had come to Cuttack, the capital of Gajapati empire of Orissa and the then emperor of Orissa Gajapati Pratap Rudra Dev received him at Gadagadia Ghata situated near the riverbank of Mahanadi very close to the king’s palace popularly known as Barabati fort. In that year Sri Chaitanya Deva started Durga puja at Binod Bihari temple presently known as Balu Bazar.

Further, it is also believed that Netaji Subhas Chandra Bose, whose birth placed is Cuttack had organized Durga puja with great pump and show to organize youngsters in British India exactly like Lokamanya Balagangadar Tilak had done it at Maharastra(the Ganesh Utsav).

The first recorded Sarvajanin Durga Puja in the state is said to have been in the year 1832 in the Kazibajaar area of Cuttack.

OdiaLive will bring you regular updates of the Puja in Cuttack & other cities of Odisha. Stay Updated!

About Maa Durga Puja in Odisha :

A pandal in Orissa is called Mandap & the idol of Goddess Durga is said to be as Murti. The backdrop tableau of Matha Durga is known as Medha. In the silver city of Odisha -Cuttack, the media or tableau is made of silver and gold ornaments. For many years, the most expensive installation was the Chandi Medha (Chaandi means Silver).

The Choudhury Bazaar of Cuttack was the first Puja committee to make Chandi Medha & Golden ornaments of Goddess Durga. The ornamentation was done entirely in silver & Gold.

A substantial increase in funding has led to the gold plating of the ornamentation. Now it is known as Suna Medha (Suna means Gold). 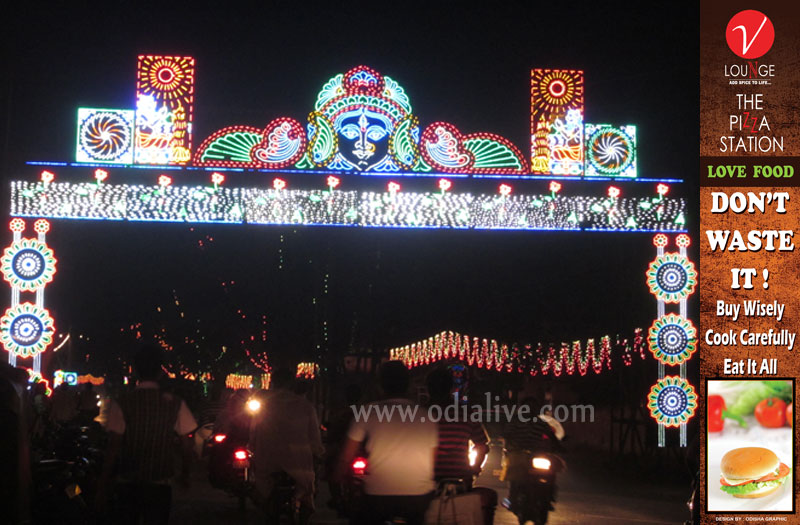