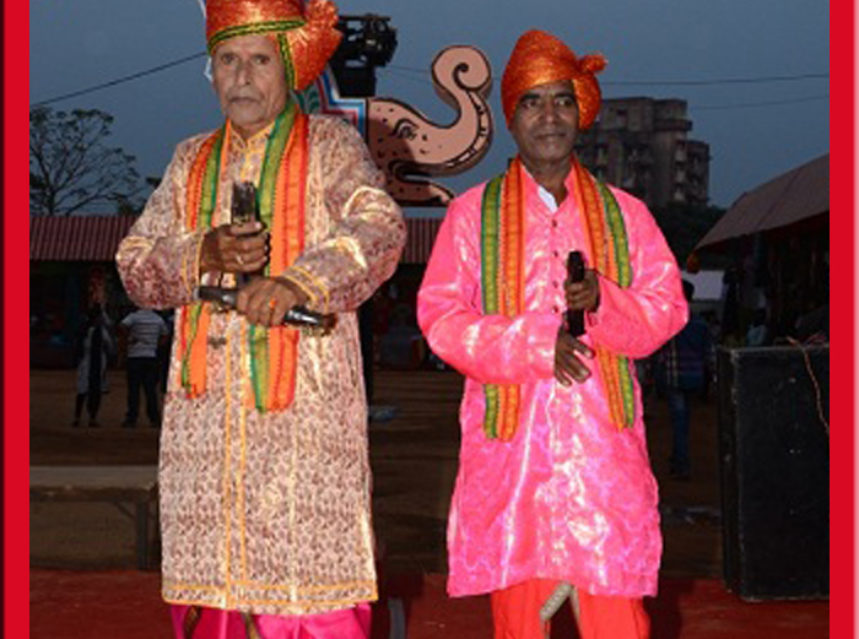 Unlike Pala ,Daskathia is again an  art form that’s exclusive to Odisha/Orissa, Daskathia is performed usually by two men, the singer and his assistant.It is said to be the simpler form of Pala. The performers – the Gayak (singer) and his accomplice (Palia) generally narrate a poem of mythological or religious intent. Apt to its name, the performance is a form of worship and offering on behalf of the Das – the devotee. A unique and indigenous musical instrument called Kathi is used in this form of performance. The singers hold these instruments in their left hand placed in between the index finger lying one over the other. As he hits one end of the stick to the other, rhythmic sound is produced.

Like the Pala Singer, the singer begins with an introduction in which he seeks the blessings of a deity. The entire narrative is interspersed with lines dedicated to the deity. The Daskathia performance is of a shorter duration than the Pala. The attire is chosen with a view to create impact in the minds of the audience. The long silken coat and the turban form the attire of the dancers and create a gorgeous spectacle for the viewers. Themes are usually drawn from the Purans, Ramayan and the Mahabharat.

This show is found mostly in the villages which is now going to extint.
According to the villagers, the people get vast knowledge of Puranas & vedas by listening to the Gayaka & used to gift him with money.
Unlike Pala,Daskathia  was one of the prominent acts in the past which is losing its value & importance in the age of Films & Internet.

Links You may prefer to visit

(Check out your nearest Theatre in Twincity )