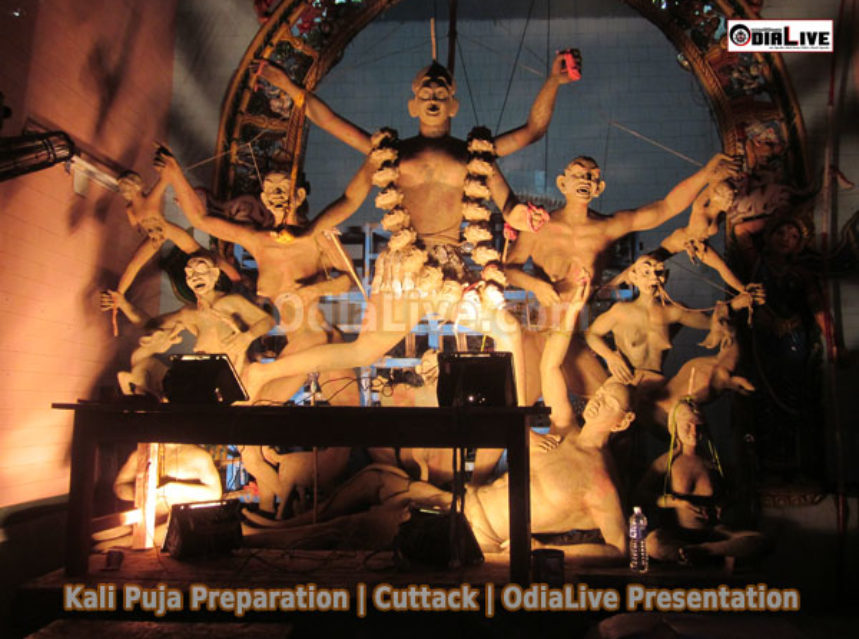 Just a fortnight after Durga Puja, people across the city gears up for Kali Puja and Diwali  celebrations.  People celebrate this occasion with fervor and gaiety. In Cuttack city around 65 mandaps will be  erected worshiping the dark-coloured deity with a garland of human skulls, tongue piercing out and stepping on a lying Lord Shiva. Kali Puja in Cuttack city is believed to have started much before the concept of Durga Puja. It is believed that this puja started in the city about 500 years ago and the concept of idol worshiping started when Bengali’s brought this tradition to Odisha/Orissa during 16th century. Among all the idols in Cuttack, the Goddess worshiped at Bakhrabad area is unique. It is called “Chhinamasta” or headless Goddess who chopped her head. The idol here holds her severed head on one hand while three streams of blood rolls out of her neck. While one stream goes down to her mouth in the severed head other two goes down to the mouths of her two associates. Instead of stepping on the lying Shiva, the Goddess steps over an embracing man and woman on a lotus. But nobody knows for sure how Chhinnamastika form of worship began at Bakhrabad.While almost all the Puja mandaps celebrating Durga Puja ,Celebrates Kali Puja. But Bakhrabad is the only place where only Kali Puja is being celebrated .

Unlike Durga Puja 2012 Celebration,OdiaLive will bring you regular updates of the Puja of Cuttack .Keep visiting .

Links of Historic Cuttack Durga Puja You may Prefer to visit